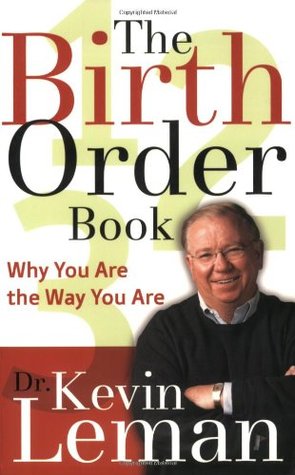 This book really gave me the chance to think about what being the firstborn did to my personality and my life outlook. I think it’s pretty clear I fit the mold of a perfectionist firstborn, thanks to having usually met the high expectations of my parents growing up. It’s been especially valuable to think about how that will affect my own parenting, especially toward my first child. I think one of the most useful things about the book is that it prepares a parent to try to mediate some of the negative consequences of birth order. Here are the main tasks for a parent for each category:

The main thing I didn’t like about this book is that he claims the effects of birth order are quite strong and far reaching, while at the same time being pretty defensive about the theory. He claims it’s “resistant” numerical analysis but goes as far as getting nervous if the pilot and co-pilot of his plane are both youngest children.. There are some instances where studies are available, like ones that show that middleborn children are the most monogamous, but he only cites studies for a small minority of the birth order effects he writes about. He sometimes makes reference to surveys or studies, but I wish he’d kept his claims closer to data. I wouldn’t be surprised if the theory were somewhat predictive, I just hate that he seems against measuring it. At the end of the day, his ideas about birth order are coming from his experiences in his counseling career, not from statistics.

my own perfectionism as a firstborn

One place where my perfectionism really shows is in my consistent over-committing to projects and goals. I need to plan space for emails, for emergencies, for slow-downs, etc. I think Essentialism is a book written by a perfectionist, for perfectionists. I’m seeing a lot of the same advice given here, like becoming skilled at saying no, and fundamentally the life outlook assumed by Essentialism sounds a lot like firstborn energy as described in the birth order book.

I think sometimes I fit the mold of “discouraged perfectionist” in that I tend to avoid working on the hard problems that I should be working on, instead choosing easy stuff that I can check off because I’m afraid I won’t be able to check off the hard stuff. That’s something that would disappear for my ideal self. My ideal self would also be less critical of others, less impatient with people who aren’t as organized or on top of things as I am. I would also be more interested in the opinions and experiences of others, and less trusting of my own reasoning. I would also say yes to things less, but still say yes to those things that the people I care about really need.

Tips for a firstborn-firstborn marriage:

I think of all the lifestyles he outlined, the one that’s most applicable to me is the achiever. Controller applies somewhat, but the “I count only when” phrase makes me think about the things I’d like to do with my life, regardless of what other people around me are doing. Stoicism has often come easy for me, for example, because even when bad things happen or when other people don’t meet my expectations I feel it shouldn’t bother me because it’s not up to me. I strongly focus on my own performance as a measure of worth.

Bonnie was a goody-goody up until these last few years. Now she’s a depressed pleaser looking for new direction.

When #2 is coming, we should tell #1 to get some toys out of the way for when the baby comes, and donate some of their toys to the baby. When #2 comes, reassure #1 that they’ll get plenty of affection still, and have them help with the baby (without correction).

Some of his comments sound a bit dated, like when he talks about his fifth child coming because he was afraid of a vasectomy, or when he gives the classic (and often bad) advice of “never going to sleep mad”.

He’s also got some lines that sound like they’re out of your grandpa’s memoir:

Today principals and teachers would shake their heads and go back to worrying about the newest dope pusher or gang member seen on campus. But in the 1960s, wastebasket arson was a big deal, and that kind of caper got me all kinds of laughs.

On the whole, I think the book was worth reading because it caused me to think more about relationship dynamics in my family, my wife’s family, and our own family, but I wouldn’t put a ton of stock in the birth order theory to make life decisions or discover “why you are the way you are”, as the subtitle suggests.