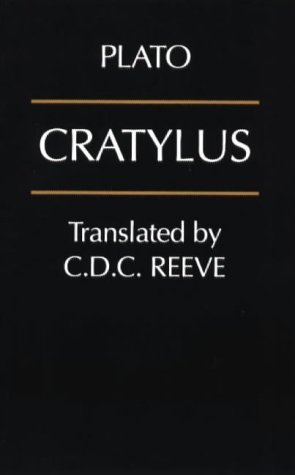 In this dialog Hermogenes comes to Socrates to discuss Cratylus’ view of the nature of names, whether they are true to the objects they represent or are just conventional. Hermogenes believes that names are purely conventional, while Cratylus believes the opposite. Socrates falls somewhere in the middle:

I quite agree with you that words should as far as possible resemble things; but I fear that this dragging in of resemblance, as Hermogenes says, is a shabby thing, which has to be supplemented by the mechanical aid of convention with a view to correctness; for I believe that if we could always, or almost always, use likenesses, which are perfectly appropriate, this would be the most perfect state of language; as the opposite is the most imperfect.

What’s fun about this dialogue is that Socrates is very rarely explicit about his view. He spends a long time pretending to be caught with “the muse of Euthyphro”, who is apparently a well-known etymologist, by coming up with all kinds of fanciful etymologies for names of gods and things, while at the same time pointing out how arbitrary the game is:

SOCRATES: Ephaistos is Phaistos, and has added the eta by attraction; that is obvious to anybody.

HERMOGENES: That is very probable, until some more probable notion gets into your head.

SOCRATES: To prevent that, you had better ask what is the derivation of Ares.

The first quote above is when he becomes most direct about his view, and it shows up toward the end.