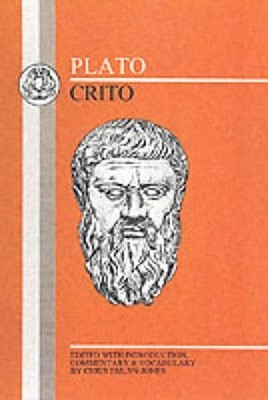 In this dialogue Crito comes to Socrates who is in prison waiting to be executed by the state. Crito has come to convince Socrates to come and escape with him. Crito’s escape plan will not cause great inconvenience for any of Socrates' friends, and he would be able to live well in Thessaly. Socrates ends up convincing Crito that it would be wrong for him to escape.

“the opinion of the many”

CRITO: But you see, Socrates, that the opinion of the many must be regarded, for what is now happening shows that they can do the greatest evil to anyone who has lost their good opinion.

SOCRATES: I only wish it were so, Crito; and that the many could do the greatest evil; for then they would also be able to do the greatest good—and what a fine thing this would be! But in reality they can do neither; for they cannot make a man either wise or foolish; and whatever they do is the result of chance.

“death or any other calamity”

But now, since the argument has thus far prevailed, the only question which remains to be considered is whether we shall do rightly either in escaping or in suffering others to aid in our escape and paying them in money and thanks, or whether in reality we shall not do rightly; and if the latter, then death or any other calamity which may ensue on my remaining here must not be allowed to enter into the calculation.

This statement by Socrates clearly distinguishes justice from outcome. His assumption is that what is just may fly in the face of what is seemingly good, whether for himself or for anyone else, and that in such cases the just ought to outweigh the good. (Although Socrates might consider “the good” to be equivalent to “the just”.)

This opinion results in the feeling that “not life, but a good life, is to be chiefly valued”.

Later in the dialogue Socrates seems to go against this argument by saying that he would “make [himself] rediculous by escaping out of the city”, due to the evil that would result for his friends and the evil that would be thought of him by citizens of all good states.

“did we not bring you into existence?”

When Socrates personifies the laws of Athens, he argues that since the state regulated the marriage of his parents, his education, and therefore his existence and upbringing, he is not on equal ground in which to strike evil back against the state because of any perceived evil done to him by the state.

What complaint have you to make against us which justifies you in attempting to destroy us and the state? In the first place did we not bring you into existence?

Later Socrates points out that he would have been able to discard his relationship with the state at any time if he had simply left the city, but because up until his conviction he never left he was now bound by that social contract to stay and suffer the penalty.

… we further proclaim to any Athenian by the liberty which we allow him, that if he does not like us [the laws] when he has become of age and has seen the ways of the city, and made our [the laws'] acquaintance, he may go where he pleases and take his goods with him. None of us laws will forbit him or interfere with him. … But he who has experience of the manner in which we order justice and administer the state, and still remains, has entered into an implied contract that he will do as we command him.

It’s interesting to see how Socrates considers himself a gadfly to the state, and yet feels completely responsible to obey the state even when it does unjustly. This probably comes from the way that Socrates conceptualizes the implied contract between him and the state as an inherently unequal. This is different from the modern (Lockean) conception of a social contract which is one that you voluntarily enter into. (Although Socrates does point out that he could have exited the contract with the Athenian state by physically leaving.)

“or he must change their view of what is just”

… whether in battle or in a court of law, or in any other place, he must do what his city and his country order him; or he must change their view of what is just: and if he may do no violence to his father or mother, much less may he do violence to his country.

Socrates seems to feel that the appropriate way to correct injustice in the state is to change the view of the state (i.e. the people in the state) of what is just.

“to fulfil the will of God”

Having convinced Crito of the injustice of escaping, Plato has Socrates conclude by saying “Leave me then, Crito, to fulfil the will of God, and to follow whither he leads.” While Socrates appears to be convinced by his own arguments, in the end he seems to appeal primarily to his inner oracle as the source of his decision-making, and then develops rational arguments post hoc.

Philosophy is not about schools of wisdom for Socrates, but about one’s fundamental orientation in the body (i.e. in action) toward a reality which may not always be discovered by the tool of philosophy.