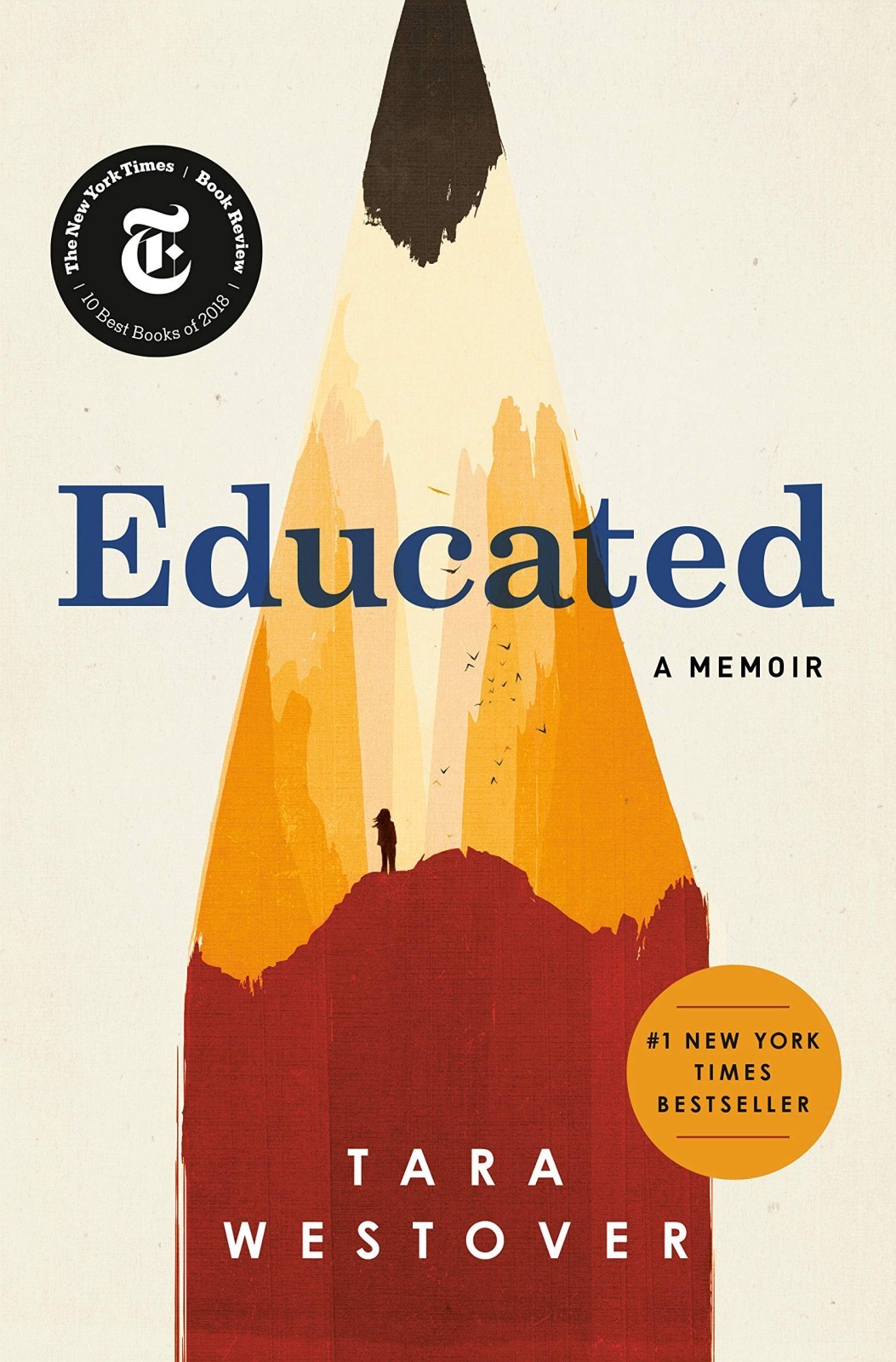 I recognized myself a little in this book, not in the events, severity, or locations but in the path to being “educated” in the sense that Westover intends. I’ll try to convey what that sense is with some quotes from the book.

The first moment is after she takes a class on American history at BYU. She returns home and gets her face dirty while working, and her brother calls her a N—r, a joke he had made many times before.

I could not have articulated this, not as I sweated through those searing afternoons in the forklift. I did not have the language I have now. But I understood this one fact: that a thousand times I had been called N—r, and laughed, and now I could not laugh. The word and the way Shawn said it hadn’t changed; only my ears were different. They no longer heard the jingle of a joke in it. What they heard was a signal, a call through time, which was answered with a mounting conviction: that never again would I allow myself to be made a foot soldier in a conflict I did not understand.

Later, when she starts to wonder if what her brother is doing is really abuse, she writes down for the first time both his version of the story and her own, finishing with “I don’t know. I just don’t know.” This was a landmark moment, as she explains:

Not knowing for certain, but refusing to give way to those who claim certainty, was a privilege I had never allowed myself [before].

During her study abroad at Cambridge, she wrote an essay comparing The Federalist Papers to the writings of Edmund Burke (a loyalist).

From my father I had learned that books were to be either adored or exiled. Books that were of God—books written by the Mormon prophets or the Founding Fathers—were not to be studied so much as cherished, like a thing perfect in itself. I had been taught to read the words of men like Madison as a cast into which I ought to pour the plaster of my own mind, to be reshaped according to the contours of their faultless model. I read them to learn what to think, not how to think for myself. Books that were not of God were banished; they were a danger, powerful and irresistible in their cunning.

To write my essay I had to read books differently, without giving myself over to either fear or adoration. Because Burke had defended the British monarchy, Dad would have said he was an agent of tyranny. He wouldn’t have wanted the book in the house. There was a thrill in trusting myself to read the words. I felt a similar thrill in reading Madison, Hamilton and Jay, especially on those occasions when I discarded their conclusions in favor of Burke’s, or when it seemed to me that their ideas were not really different in substance, only in form. There were wonderful suppositions embedded in this method of reading: that books are not tricks, and that I was not feeble.

In another chapter, she attends a class at Cambridge where they discuss Isaiah Berlin’s concepts of positive and negative liberty. Negative liberty is explained as “the freedom from external obstacles or constraints. An individual is free in this sense if they are not physically prevented from taking action.” Positive liberty “is freedom from internal constraints”:

He said positive liberty is self-mastery—the rule of the self, by the self. To have positive liberty, he explained, is to take control of one’s own mind; to be liberated from irrational fears and beliefs, from addictions, superstitions and all other forms of self-coercion.

I had no idea what it meant to self-coerce. I looked around the room. No one else seemed confused. I was one of the few students taking notes. I wanted to ask for further explanation, but something stopped me—the certainty that to do so would be to shout to the room that I didn’t belong there.

Soon after she gets an email from a friend containing lyrics to Bob Marley’s “Redemption Song”:

Emancipate yourselves from mental slavery

None but ourselves can free our minds

She was enraptured and looked up Bob Marley online. She learned that he had died of a cancer in his foot which would have been preventable except that he refused amputation because of his Rastafarian beliefs.

Emancipate yourselves from mental slavery. Marley had written that line a year before his death, while an operable melanoma was, at that moment, metastasizing to his lungs, liver, stomach, and brain. I imagined a greedy surgeon with sharp teeth and long, skeletal fingers urging Marley to have the amputation. I shrank from this frightening image of the doctor and his corrupt medicine, and only then did I understand, as I had not before, that although I had renounced my father’s world, I had never quite found the courage to live in this one.

I flipped through my notebook to the lecture on negative and positive liberty. In a blank corner I scratched the line, None but ourselves can free our minds. Then I picked up my phone and dialed.

“I need to get my vaccinations,” I told the nurse.

“Which ones?” she asked.

There is nothing like the experience of seeking an education, even if personally I was never that far from the mainstream world. Serious study causes the collision of ideas that creates your mind, and that collision can’t be produced in any other way.

Westover is careful to add footnotes when her version of the story differs substantially from other versions she’s collected from her family members, and I think that reflects a broader thematic concern with memory. After she confronts her parents about her brother’s abuses, her brother refuses to talk to her and her parents take his side.

My parents said he was justified in cutting me off. Dad said I was hysterical, that I’d thrown thoughtless accusations when it was obvious my memory couldn’t be trusted. Mother said my rage was a real threat and that Shawn had a right to protect his family. “Your anger that night,” she told me on the phone, meaning the night Shawn had killed Diego, “was twice as dangerous as Shawn has ever been.”

Reality became fluid. The ground gave way beneath my feet, dragging me downward, spinning fast, like sand rushing through a hole in the bottom of the universe. The next time we spoke, Mother told me that the knife had never been meant as a threat. “Shawn as trying to make you more comfortable,” she said. “He knew you’d be scared if he were holding a knife, so he gave it to you.” A week later she said there had never been any knife at all.

“Talking to you,” she said, “your reality is so warped. It’s like talking to someone who wasn’t even there.”

There was a time when she very seriously considered giving up her version of the story so that she could be accepted back into the family.

“The Lord has commanded me to testify,” Dad said. “She may yet be brought to the Lord.”

While they plotted how to reconvert me, I plotted how to let them. I was ready to yield, even if it meant an exorcism. A miracle would be useful: if I could stage a convincing enough rebirth, I could dissociate from everything I’d said and done in the last year. I could take it all back—blame Lucifer and be given a clean slate. I imagined how esteemed I would be, as a newly cleansed vessel. How loved. All I had to do was swap my memories for theirs, and I could have my family.

When life itself seems lunatic, who knows where madness lies?

In the days that followed, I wrote that passage everywhere—unconsciously, compulsively. I find it now in books I was reading, in my lecture notes, in the margins of my journal. Its recitation was a mantra. I willed myself to believe it—to believe there was no real difference between what I knew to be true and what I knew to be false. To convince myself that there was some dignity in what I planned to do, in surrendering my own perceptions of right and wrong, of reality, of sanity itself, to earn the love of my parents. For them I believed I could don armor and charge at giants, even if I saw only windmills.

At the climax, her dad offers her a priesthood blessing:

The blessing was a mercy. He was offering me the same terms of surrender that he had offered my sister. I imagined what a relief it must have been for her, to realize she could trade her reality—the one she shared with me—for his. How grateful she must have felt to pay such a modest price for her betrayal. I could not judge her for her choice, but in that moment I knew I could not choose it for myself. Everything I had worked for, all my years of study, had been to purchase for myself this one privilege: to see and experience more truths than those given to me by my father, and to use those truths to construct my own mind. I had come to believe that the ability to evaluate many ideas, many histories, many points of view, was at the heart of what it means to self-create. If I yielded now, I would lose more than an argument. I would lose custody of my own mind. This was the price I was being asked to pay, I understood that now. What my father wanted to cast from me wasn’t a demon; it was me.