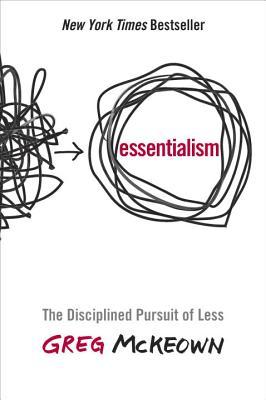 The main character of the first story slowly changed his attitude toward demands on his resources.

It’s important to pursue “less but better” in a disciplined way. Simply doing fewer things is not meaningful. Most things in the world are trivial noise, and my job is to sift through noise and find things that are truly valuable. This involves active consideration of responsibilities and trade-offs involved in making a choice. I think I often try to “force execution at the last moment”, which is a mark of a non-essentialist.

I identify a little with the overly excited tech executive who felt interested in a million directions at once. It’s important for me to discern the relatively few topics and efforts that really matter, and dedicate myself to them without external requirement.

One of the ways our world today is inherently different from that of 100 years ago is that a huge number of people have choices and have to manage themselves. It means that often I will have to say no to really good opportunities.

“What if we stopped celebrating being busy as a measurement of importance? What if instead we celebrated how much time we had spent listening, pondering, meditating, and enjoying time with the most important people in our lives?”

The essence of essentialism

Essentialists recognize that choices are actions, not things. If we don’t make a decision, we forfeit that decision.

There are a few things that I could do that would make a massive improvement to my life, my career, my family, and my service to others.

Keeping options open is not valuable. During law school as the author pursued so many available choices “the result was that while I was not entirely failing in any pursuit I was not entirely succeeding at any either.” He had chosen to focus on too many things. I have felt the same way, especially during school.

The importance of opportunities or ways to spend time follows a power law distribution. Essentialists actually say no to many good opportunities.

“The top software developers are more productive than average software developers not by a factor of 10X or 100X or even 1,000X but by 10,000X.” – Nathan Myhrvold, former CTO of Microsoft. I think top software developers (see citation in the next section) probably don’t produce more code than those at the bottom. They probably produce less. This means part of their efficiency comes from the fact that they’re coding the right things, because they take some time to think about it beforehand.

When we choose to say “yes” to something, we are saying “no” to several other things. To try to fit more things in than is possible is a straddled strategy (like the story of Continental Lite). You have to be deliberate with trade-offs: choose those things that you want to drop, in favor of a coherent strategy of choices.

It’s important to rank things that I value in order, so that when a conflict arises the value question is useful. Then when I approach trade-offs, I can say “Which problem do I prefer to have?” rather than “How can I do both?”.

We should help our kids go after the things they care about most. I should trade other concerns for “going big” on a few things: family and church being the biggest. But I need to decide what that means: what parts of my family life are most important to me?

Essentialists explore their options actively, and then commit to the best. They fill their jars with large, essential rocks before filling in with smaller, important pebbles. Non-essentialists make these decisions as they come, and often miss out on the best things.

Decide how I will get away from the world and focus on thinking. The goal is to spend as much time as possible exploring, listening, debating, questioning, and thinking.

This one guy makes his whole company get into a room to just talk and think without any distractions.

Keep a journal. Only write a little. Read over it every so often, but don’t pay attention to the details. Notice patterns.

Actively choose to read about topics I’m interested in, taking time to think about the bigger picture.

Take time to enjoy activities just for the fun of it. It sparks creativity and breaks me out of the rut.

I also need to play at work. I need to explore and have fun to stretch my mind.

Have the kids draw or play when they get stressed.

The real challenge for the overachiever is to say no to an opportunity so that you can sleep.

Rate things from 0 to 100, and anything below 90 isn’t good enough. Explicitly define what’s good enough, and say no otherwise. It might be hard to reject what looks like a good opportunity, but God will always help me find the right path and not miss the truly important things.

System for deciding whether to accept an opportunity:

Here’s a story that inspires me to actively choose my career path:

Early on in his career, Enric was a professor at the prestigious Scripps Institution of Oceanography in La Jolla, California. But he couldn’t kick the feeling that the career path he was on was just a close second to the path he should really be on. So he left academia and went to work with National Geographic. With that success came new and intriguing opportunities in Washington, D.C., that again left him feeling he was close to the right career path but not quite on it yet. As often happens to driven, ambitious people, his earlier success had distracted him from his clarity of purpose. Since the moment he had watched Jacques Cousteau aboard the famed Calypso he had dreamed of diving in the world’s most beautiful oceans. So after a couple of years, when a golden opportunity presented itself, he changed gears again in order to be where he could truly make his highest contribution: as an explorer-in-residence with National Geographic, where he could spend a significant portion of his time diving in the most remote locations while also using his strengths in science and communications to influence policy on a global scale. The price of his dream job was saying no to the many good, even very good, parallel opportunities he encountered and waiting for the one he could enthusiastically say yes to. And the wait was worth it.

How to decide where to take my career:

“If I didn’t own this, how much would I spend to buy it?” is equivalent to “If I didn’t have this opportunity, what would I be willing to do to acquire it?”

I need to be extremely clear about my purpose (goals) and strategy (plans). “Sort of clear” is not nearly good enough.

Inspirational and concrete decisions eliminate thousands of others. For example “I will seek a medical degree instead of a law degree” means that over the next 5-10 years there will be a ton of small actions taken that lead toward that goal. Another example is “Get everyone in the UK online by 2012.”

What is the one thing I will be truly exceptional at in my career?

It’s easy to talk about choosing things that matter most, but it’s rare to see someone who actually does it. For example, when I see an old friend and they invite us out for dinner, do I stick with plans with my daughter or do I rearrange them? What is essential to me when I am pondering alone should be essential to me under the pressure of decision time.

It’s important to learn to say no respectfully and graciously, but directly.

When making the decision:

Sunk cost bias, yo. Admit mistakes. How much would I invest if I had to get in now? Ask someone who isn’t emotionally invested.

Zero-based budgeting: assume all previous commitments are gone, and then add them back one at a time. Don’t start from where you are and then modify.

Run a reverse test: stop doing something, and then see if it causes a problem.

A CEO is “chief editor”. They choose 1-2 ideas from 1000. Disciplined elimination is sooo hard, because you may have spent years on something that needs to be eliminated.

Allow tons of time for Q & A, for example. Plan for extra time before/after things.

What is the constraint in my life? What is the slowest-moving thing in my routine? What is getting in the way of real progress? There’s often a single obstacle that, if removed, makes the whole project effortless. One example is an unnecessary desire for perfection in a prototype.

For example, the author’s wife was stressed with taking care of the kids while he was at grad school. They realized that the primary cause was that she didn’t have time to think and plan. He dropped some extracurriculars and they paid for a few hours of child care per week, and that made it possible for them to actually contribute better to their children, not worse.

Every day, do something that makes real, small progress.

What is the minimal, viable amount of progress in this project that can really be valuable? For example, what is the first thing in my app project that I can accomplish that will really improve my skills and prepare me for grad school?

As you make progress, you learn what you need to make further progress. For example, it’s important to get to a review stage as quickly as possible, because that review could invalidate work already done.

It can be important to simply start planning or thinking about something, so it can simmer.

Routine makes a series of wins happen without tough decision-making. We accomplish essential goals without much daily energy.

Lots of our choices (40%?) are unconscious. Recognize what cues cause us to follow our habits, and use those cues to develop a habit of doing something else.

When I feel distracted by many different things I need to accomplish or think about, I should turn off my phone, clean up the space around me, and pause to think about what’s important right now (not tomorrow, or the next moment).

Before transitioning from work to home, take a moment to pause, breathe out work, and breathe in family.

Gandhi died owning fewer than 10 things. He initially had the goal of becoming a lawyer and making a good living, but after traveling the world his entire perspective changed. He then created habits for himself that let him focus on what truly mattered.

Simplicity, but high contribution and meaning. (NOT success.)

Essentialism has the greatest benefits when it defines who we are rather than simply being something we do once in a while.

I need to find the perfect grad school situation for us. My career will be less meaningful if it is driven by a desire to be recognized as successful or intelligent. It will be much more meaningful if I focus on using my career as a way to live a life of service.