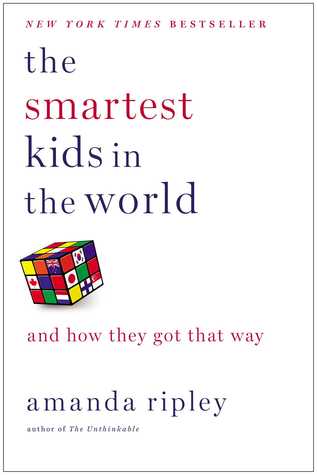 The PISA test tests common senses reasoning. The countries that did best on the test were a surprise to everyone. Finland, South Korea, and Poland were all standouts in their own ways, and Ripley compares the policies and learning environments in these countries with those of the US to determine why the US is falling behind, especially in math and science.

We talk a lot about parent involvement in the US, but the US actually has above average parental involvement. It turns out it’s not very correlated with success. Parent involvement is most useful when it’s reading to your child every day or asking them deep questions about school and about their opinions of broader issues. In the US we have lots of superintendents over small school districts, so there’s a lot of overhead without much benefit. We’re also afraid of standardization, so each school district has to sort of reinvent the wheel when it comes to curricula and standards. Common Core is an attempt by state education departments to agree to standards together so that textbooks and schools can target their products and training toward a common, well-defined set of goals.

In America we have the belief that there are certain people who are good at math and it’s ok to not be good at it. Contrast this with reading, where we think everyone ought to become good at reading and if you aren’t, you need to fix that. The United States industrialized at a time when reading skills were essential for the jobs of the new economy, but these days, the “education superpowers” are becoming wealthy in a period where math, science, and critical thinking are the skills most needed (and rewarded) in the world. In these countries, kids are expected to develop these skills, and it’s a problem if they don’t. Even factory jobs are beginning to be outsourced to other countries because a US high school diploma can’t be trusted to provide the kinds of critical thinking and communication skills necessary for the work.

We create narratives (poverty, bad family situation, etc.) to explain why schools are less successful, and that idea is attractive and sticks around even if it isn’t true. The good news for the American school system is that private schools don’t appear to have a leg up on public schools. Unfortunately, because we fund schools based on property taxes, schools with poorer kids tend to receive less funding than schools with wealthier kids. Instead, school funding should increase for schools that are struggling.

South Korean kids are successful on PISA and the Korean school system is spoken well of throughout the world, except in South Korea where everyone feels like there’s too much pressure. The kids are unhappy and unproductive during public school hours (they learn more in private school at night). In Finland, kids actually do less homework on average than American kids do. It turns out that it’s not enough just to pay teachers well; teachers in Finland make more than teachers in the US, but not a whole lot more. The teaching in Finland is high quality because the teaching profession is prestigious and rigorous: a master’s degree is required, and it involves very intense selection, testing, and residency training in order to become a teacher. In the US, studying the teaching of a subject is known to be easier than the main subject itself. We massively overproduce teachers, to the detriment of quality.

In Poland, one of the main things that brought the recent dramatic improvements has been standardized testing. In the US, we have a lot of standardized tests, but they don’t have consequences for students. Nearly all “education superpowers” have graduation tests that you must pass in order to graduate. That’s something that’s been fought over in the United States for decades.

The other policy change that led to drastic improvements in Poland was postponing tracking. I used to think the United States didn’t have tracking, but tracking doesn’t just mean having the option of vocational schools like they do in many European countries. In the US we do tracking at a very early age when we place students into different levels of math. But studies have shown that it’s better to put students of all abilities together in the same learning environment. Not only do the bottom-performing students learn better, but research suggests that the top performers learn better as well. In the United States we put high-performing students into “talented and gifted” programs from a young age. Putting them there basically tells them that they are smart, and they believe it for the rest of their lives. Not putting other kids in those programs tells them that they are not smart, and they believe that for the rest of their lives.

There are three kinds of parenting styles:

Kids with authoritative parents/teachers/environments perform the best. It is really all about rigor. When parents, teachers, and society expect rigor from kids, kids meet that expectation. When we are more concerned about students’ self-esteem than their performance, we avoid teaching them to deal with failure until they fail in the real world.